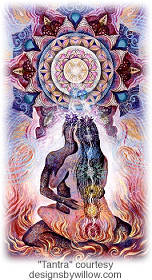 In patriarchal societies seeking to repress feminine energy the expression of sexuality and sensuality by women has been punished by intimidation, oppression, and persecution creating a fear of physical touch. Tantra teaches us that the the sexiest potential we have isn’t based on physicality, either through looks or sexual techniques, but by fostering connection and intimacy through touch.

By tapping into our natural abilities to experience ecstasy we can discover a powerful sexuality that is beyond either what the body looks like or sexual performance. We can explore sensuality using touch as enjoyment within itself, in terms of giving and receiving. It is the opposite of physical sex which is performed for the goal of orgasm.

Tantra is about being in the moment of the enjoyment of sensual pleasure, accessing the capability of phenomenal connection that brings true contentment and happiness. We have the capacity to go beyond physical sex to an experience that involves the mind, emotions, feelings, passion, and presence.

The ancient Egyptians didn’t believe that sex was a sin. In Egyptian times the phallus of the Pharaoh created union between heaven and earth though love making with his Queen. Patriarchy has twisted this meaning so that in Victorian times the word ithyphallic meant ‘grossly indecent’.

Isis was an Egyptian goddess who was worshipped for thousands of years by the Greeks and Romans until Christianity banned her worship in the sixth century.

Isis loved the god Osiris who was killed by Set, his jealous brother, who scattered the dismembered pieces of Osiris’ body throughout Egypt. Isis searched for each body part peice by piece but was unable to locate the penis which had been eaten by fish in the Nile. In order to resurect Osiris she had to make love to him so she created a golden phallus which is a symbol of the ancient sexual wisdom known as the Mysteries of Isis.

The Mysteries teach the secret of how sexual union can be used to commune with the gods.

Initiation grants the sacred privilege of seeing the Realm of the Gods and receiving divine vision which is beyond the illusion of Time.

Mary Magdelene had been a High Priestess initiated into the Isis Mysteries in a previous incarnation in Ancient Egypt.

When asked at what moment the Kingdom would come, Jesus replied: ‘When the two shall become one, outside like the inside, the male with the female, neither male nor female.’ http://earlychristianwritings.com/thomas/gospelthomas22.html

This is very different from the way Catholicism and Christianity regard sex, which was decided by Augustine. Hebelieved his erection was his physical body’s betrayal of the spirit, so he deemed sex to be shameful, evil, and the work of the devil.

The church doesn’t recognise that sex is the universal life force because it can give direct access to God which would eliminate the control of the church over humanity. Instead humanity has feared and repressed sexuality, particularly that of women.