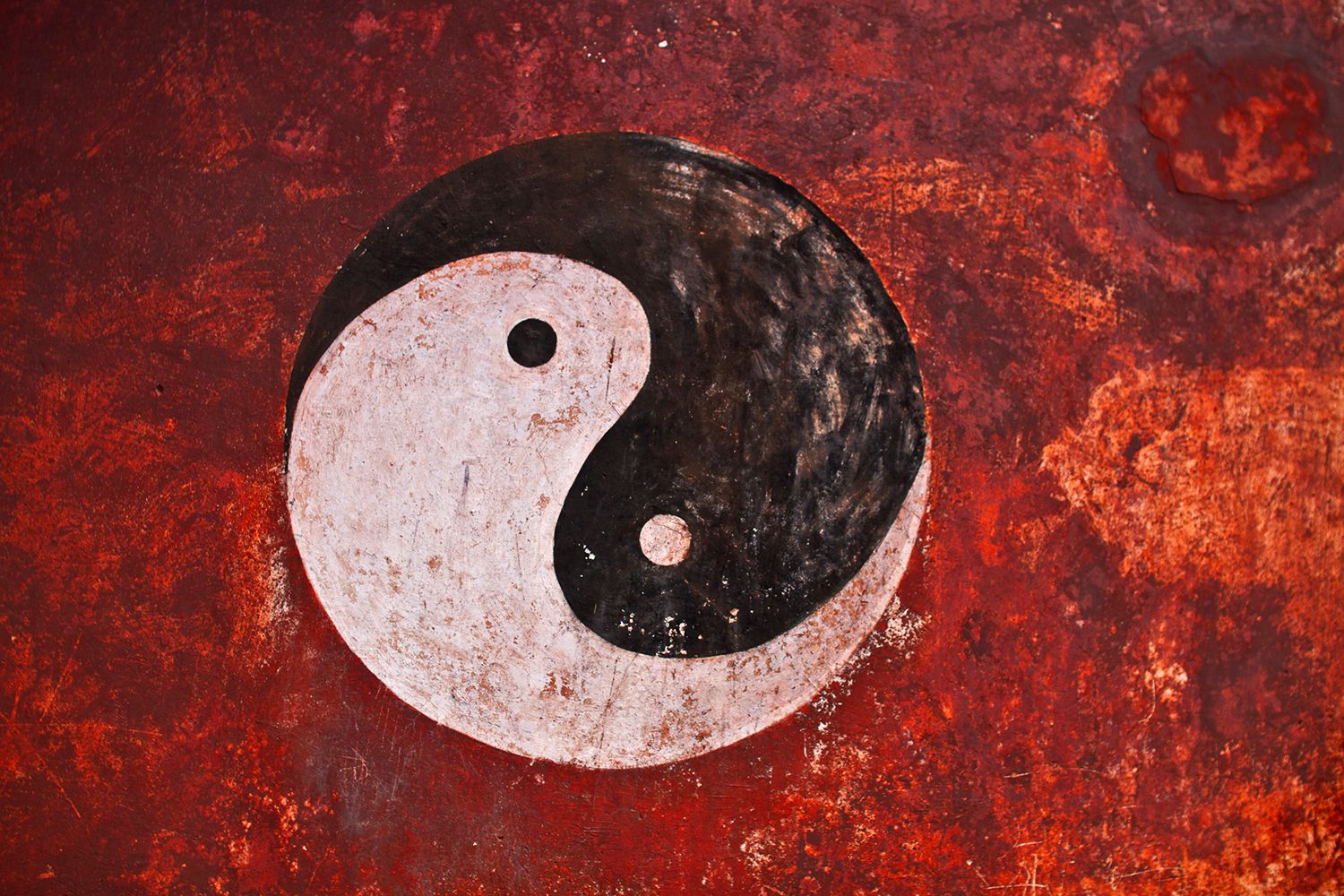 Tantra & The Power of Hugs

This blog post was inspired by a man I know who was assisting a couple with their family business. The couple were experiencing difficulties in their relationship, which was causing major financial issues. He discovered that their financial problems had been caused by the husband having not healed enough from his childhood trauma to stand in his true divine masculine power in either their romantic or business relationships.

He also correctly identified that as a result of the husband’s shortcoming, the wife was lacking connection with the divine masculine energy. However, rather than working with the husband to build the divine masculine in him, he took it upon himself to supply the energy to the wife himself through full contact hugs. After a while she abruptly dismissed the man for a reason that was nothing to do with his work performance. Unbeknown to him, his act of compassion for the wife may have been creating a bond of intimacy, which she then decided to break.

Musing on the sudden and brutal nature of his dismissal I felt compassion for him and experienced a pain across my heart chakra which I transmuted back into love. The performance of this metaphysical action caused me to remember the power that we all hold in our heart space. I have previously written about the importance of holding heart-centred, loving energy for discernment and as a way of moving away from ego into the divine energy of 5D, but I haven’t yet shared my research into Tantra and how it introduced me to another powerful role the heart chakra plays.

In chapter three of her book, The Heart of Tantric Sex – A Unique Guide to Love and Sexual Fulfilment, Diana Richardson introduces the enlightening concept of ‘Polarity and the Positive Poles of Love’. She explains that the basis of Tantra is the creation of sexual experience through the dynamic interplay between the opposing positive and negative magnetic forces of the masculine and feminine energy.

The male represents the positive and the female the negative and it is this polarity that is the true source of sexual ecstasy. When the male and female bodies are in sexual union a powerful magnetic field is created and bio-energy is circulated between the couple. This Kundalini energy is transferred through the meeting of the positive and negative poles on both the male and female bodies.

In women the breasts are the positive pole and this is complemented by the male heart chakra which is the negative pole. Her loving, feminine energy is transmitted through her breasts to the male through his heart chakra. It moves down the spiral to his penis: his positive pole. The penis then transfers the masculine energy to the woman by connecting with the negative pole of the vagina, pushing the energy up into her heart chakra, thus completing the bio-electric circuit, creating a powerful union and true sexual fulfilment.

Western society places much emphasis on the union between the lower poles but provides very little information about the roles the upper poles play in loving relationships. Therefore, discussions about sex and our own direct experience of sexual contact tend to focus attention on the achievement of orgasm through the stimulation of the lower poles, which the author explains can lead to frustration and lack of fulfilment.

In contrast the Tantric approach to lovemaking gives more focus to the stimulation of the breasts throughout the encounter, since they have the same energetic potential as the penis. This generates an equality between the upper and lower poles that isn’t usually considered.

With a focus on the feelings involved in the now moment, Tantra also removes the goal of orgasm and therefore the perceived necessity for excessive stimulation of the lower poles. This shifts our focus the to the feelings resulting from energy transfer, which occur on a more subtle, yet deeper level of experience. In turn expectation is reduced and any stress about sexual performance disappears, creating a more relaxed encounter which has the potential for deeper feeling.

The Tantric journey of love begins with eye contact to establish trust, gentle touch on the non-sexual parts of the body to focus attention on feeling in the now moment, before progression to establishing contact between the poles. Once trust and attainment with feeling has been established, polarity contact starts with a full-frontal hug whereby the heart chakras meet and the breasts transfer the female energy. This would evolve into contact between the penis and the vagina creating a continuous loop of energetic exchange through the positive and negative poles. In this way neither the man nor the woman would become depleted of energy, as they are both continually filling each other up through an endless circuit of energetic exchange.

The equal and complementary nature of the poles and the sharing of energy means that an energetic transfer can occur without doing anything. Basic contact between the poles is enough to create an energy transfer that develops feelings of love and arousal without the need for excessive friction or stimulation. This makes a full-frontal hug between a man and a woman a very powerful experience. As a powerful form of energetic transfer this form of hug is actually a very intimate experience and, in my opinion, should be reserved for relationships where intimacy is to be promoted between consenting partners.

There are some men within the spiritual and plant medicine circles that I have observed who are more relaxed and bodily aware than the majority. They sometimes perform breast-squeezing hugs with women who are not their sexual partners and who may be acquaintances or friends. It could be said that a single man exhibits this behaviour to fulfil a subconscious need for connection with female energy. However, I have also witnessed men who already have a romantic partner engaging in this type of hug with other women. In both cases, they are opening an energetic circuit and therefore receiving energy from the woman. I have also observed either a subconscious or conscious enjoyment by the man of witnessing the pleasure that it gives the woman when she experiences this energetic exchange; which may give them the impression that they are giving rather than receiving.

However, as someone who has experienced both forms, I can attest that it may be unsettling for the woman in either case. This is because her energy has been taken and has not been replenished by reciprocation from the male via his positive pole. The energetic circuit has been opened but not completed, leaving a vacuum.

A parallel could be drawn between sexual union, which some women considering to be a bonding experience with the man they love. These woman can be left feeling hurt and used by promiscuous men who are having the experience for their own pleasure. In this case the man is not making love to her in the true sense because he is not giving his love and energy to her, so the energy circuit is not completed. A woman experiencing this may fee empty and unfulfilled as a result. Such a woman may consider the full frontal hug as signal from the man that he is interested in taking their relationship from friendship into romantic partnership; so when this fails to materialise she may feel let down, and similarly empty. Of course, it is not to say that other women cannot enjoy these experiences.

In Tantra, connection of the positive and negative poles forms a deeper energetic transfer that is meant to be part of sexual union. So if we consider the close hug from a Tantric perspective, the woman who has received such a hug from a man who is not her partner may be left with feelings of having been used because she can feel her energy has been taken. When experienced with loving intention, contact between the poles it is a way of building intimacy between a couple that are starting a romantic relationship. It achieves greater depth and power when the man has developed his energy so that he enters the divine masculine. The contact with the woman has greater resonance if she is in her divine feminine. This union of divine energy is the pinnacle of relational experience.

However, there is a dark aspect to this energy transfer. When the close hug is performed by men who are not interested in building intimacy as part of a relationship it can become problematic for the woman if she is left feeling that something has been taken from her. Should the man be meeting his own energetic needs to the detriment of the woman, then we are experiencing the dark aspect of the hug as a form of violation and/or a crossing of boundaries in the same way that casual sex by one party is misunderstood as intimacy and bonding by the other; her enjoyment of the hug may cause her to seek further intimacy and if the man doesn’t reciprocate she may feel that she has been led down the garden path.

In my experience, when a man for whom I have no romantic interest suddenly surprises me with a close hug the shock of the my nipples coming into contact with the man’s chest is at odds with the pleasurable feeling that is created. Then the hug ends and I am left flooded with sexual arousal and I have then been left feeling confused about the nature of the relationship and feeling that a boundary has been crossed.

The flip side of this would be a woman giving a man who is not her sexual partner a close hug and then rubbing her pelvis against his penis. This would also be considered contact with the positive and negative poles between the masculine and the feminine. The question is would that be deemed to be appropriate behaviour? Does the answer to that question cast doubt over the appropriate nature of the close hug between a man and a woman who are not in a relationship? 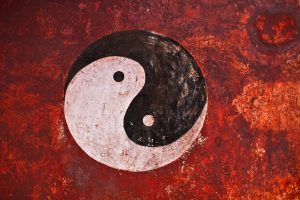 The Yin-Yang symbol is a Taoist symbol comprising a circle divided into two halves, one white and one black, each containing a small circle of the opposite colour. The black and white halves represent the primordial masculine and feminine energies whose interaction creates universal manifestation. They are mutually-arising, interdependent, and coninuously transfoming just as day turns into night and birth moves towards death. One cannot exist without the other because each contains the essence of the other.